From 1931 until 1952, Shreveport Downtown Airport served as the community’s air carrier airport. Service was initially provided by Delta Air Lines, beginning in 1929 with Delta’s first route from Dallas to Shreveport and on to Monroe and Jackson, Miss.

Following World War II, the demand for expanded airline service at Shreveport increased. In addition, longer runways were required to accommodate the new generation of jet aircraft. Because of land limitations, the closely located Shreveport central business district and military aircraft traffic from nearby Barksdale Air Force, the decision was made to build an entirely new airport on the western edges of Shreveport. 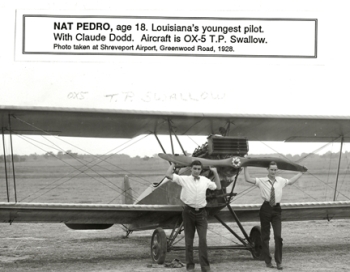 The Airport’s Move to West Shreveport

In May 1947, the city committed $2.4 million for its share of a new terminal building for the new airport. In 1948, the city retained an architectural engineering firm to recommend an airport site. In 1949, a general election was held and the current airport site was approved. Initial construction of Greater Shreveport Municipal Airport consisted of a 6,400-foot by 20-foot runway with a full length parallel taxiway. The crosswind runway measured 4,821 feet long by 150 wide. Airline service was initially provided by Delta Air Lines, Chicago and Southern Airlines and Mid-Continent Airlines. The new terminal included airline ticket counters, a restaurant, offices and viewing deck.

The new airport opened July 6, 1952, replacing the Shreveport Downtown Airport as the community’s air carrier airport. At this time, all commercial flights were transferred to the new Greater Municipal Airport. The new airport functioned well and grew as the demand for air service increased. However, because of massive growth in the airline industry and changes in federal regulations related to both air service, another expansion was needed. 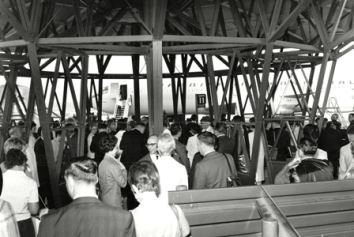 The Airport Expanded in 1971

In 1971, a 160,000-square-foot terminal with two new concourses, administration building and connector bridges with adjacent parking were added. At that time, the name of the airport was changed to Shreveport Regional Airport. Once the new terminal opened, commercial air service moved from the original terminal into the new facility. The original terminal was then converted for use as the airport’s fixed base operator terminal.

Air service grew throughout the 1970s and in the early 1980s. At one time, Shreveport Regional served as a mini-hub for Delta Air Lines. Airline deregulation in 1978 led to the failure of several airlines and the introduction of others. During this time, numerous expansions also occurred, including the addition of air cargo terminals, lengthening of runways and the addition of numerous other cargo ramps, taxiways and hangars at the airport. 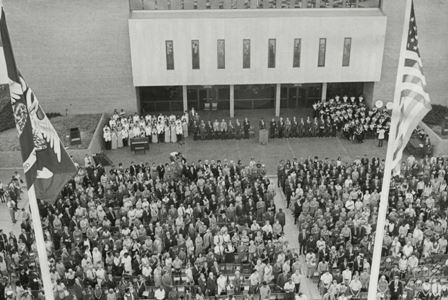 In 1998, ground was broken on a $30 million expansion/renovation project at Shreveport Regional. The expansion included the addition of a 66,000-square-foot terminal building on the eastern side of the concourses and administration building.

The new facility allowed the airport to consolidate all airline ticket counters and rental cars into one operation, as well as centralized baggage claim operations. During construction, the facilities built in 1971 and 1972 were completely renovated. These renovations included remodeling the restaurant, airport security, airport administration offices, the concourses, bathrooms, passenger loading gates and elevators. Additionally, all heating/air conditioning, fire protection, plumbing and electrical systems were upgraded. The parking lots were reconfigured and repaved, along with new parking booths added.


The renovations were unveiled to the public in November 1999, just in time to use the new terminal for the busy Thanksgiving holiday travel season. In the nearly 20 years since the terminal building opened, the Shreveport Airport Authority has continued to make changes to improve passenger service for the ever-changing travel industry.

The 2000s and early 2010s saw airlines consolidate, like TWA with American Airlines, Northwest Airlines with Delta Air Lines and Continental Airlines with United Airlines. With this industry consolidation, SHV now has three of the four big US airlines serving the Ark-La-Tex region.

In 2018, due to increased passenger numbers, the airport consolidated the two individual security checkpoints into a single location in the main atrium area. This helped make the already swift security screening process at SHV even faster.


Today, many of the original features of the Greater Municipal Airport can still be seen. TAC-Air, the airport’s fixed base operator, has completely renovated the terminal built in 1951 and continues to operate in that facility. Additionally, the airport has seen the growth of a strong general aviation community with privately owned hangars located on the east side of the airport. 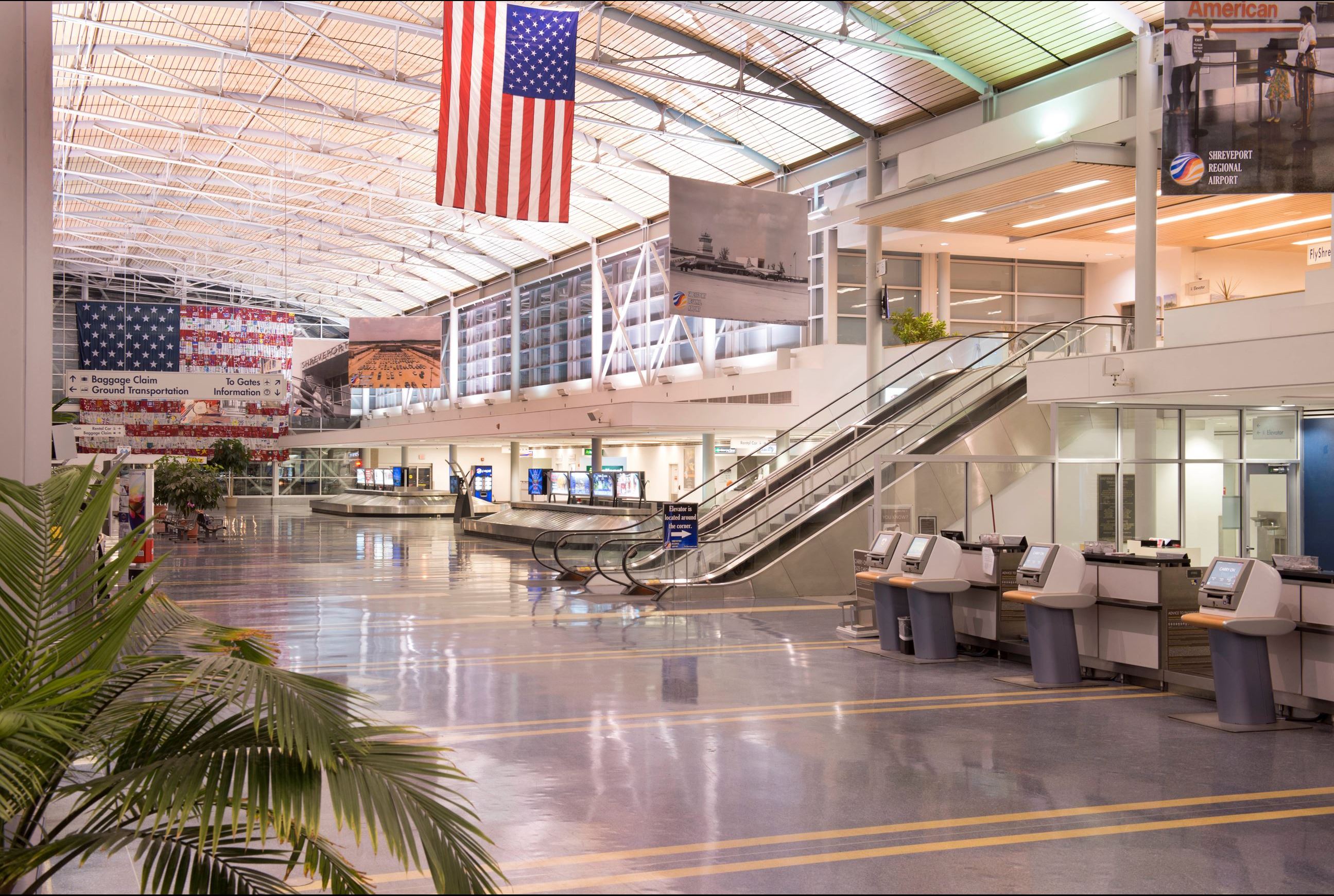 Shreveport Regional Airport is also home to AeroPark, an industrial park located on the southwest corner of the airport. In the 1980s, Rockwell International moved its military aircraft modifications facility in Texas to Shreveport to a new 148,000-square-foot hangar. Rockwell was purchased by Boeing Corp. in the late 1990s and continued to operate the facility until Fall 2001.

In August 2001, ExpressJet Airlines, a regional jet provider for United Airlines, signed a long-term lease for the hangar and moved into the former Boeing facility in November 2001. The company operated multiple heavy maintenance lines for its Embraer 145 regional jet fleet. The operation has expanded with a 24,000-square-foot addition to the existing hangar and the lease of a second 28,000-square-foot hangar at the airport. At its height he company employs more than 300 in Shreveport. ExpressJet operated in the hangars until November 2017.

In May 2018, Western Global Airlines announced they would be opening a maintenance base at Shreveport Regional Airport for their fleet of wide-body aircraft. Western Global is an all-cargo airline, operating its owned fleet of B747-400 and MD-11 freighter airplanes worldwide for many of the top airlines, express companies, logistics providers, humanitarian and relief organizations, and the U.S. Department of Defense. Western Global has flown to 315 countries on six continents. 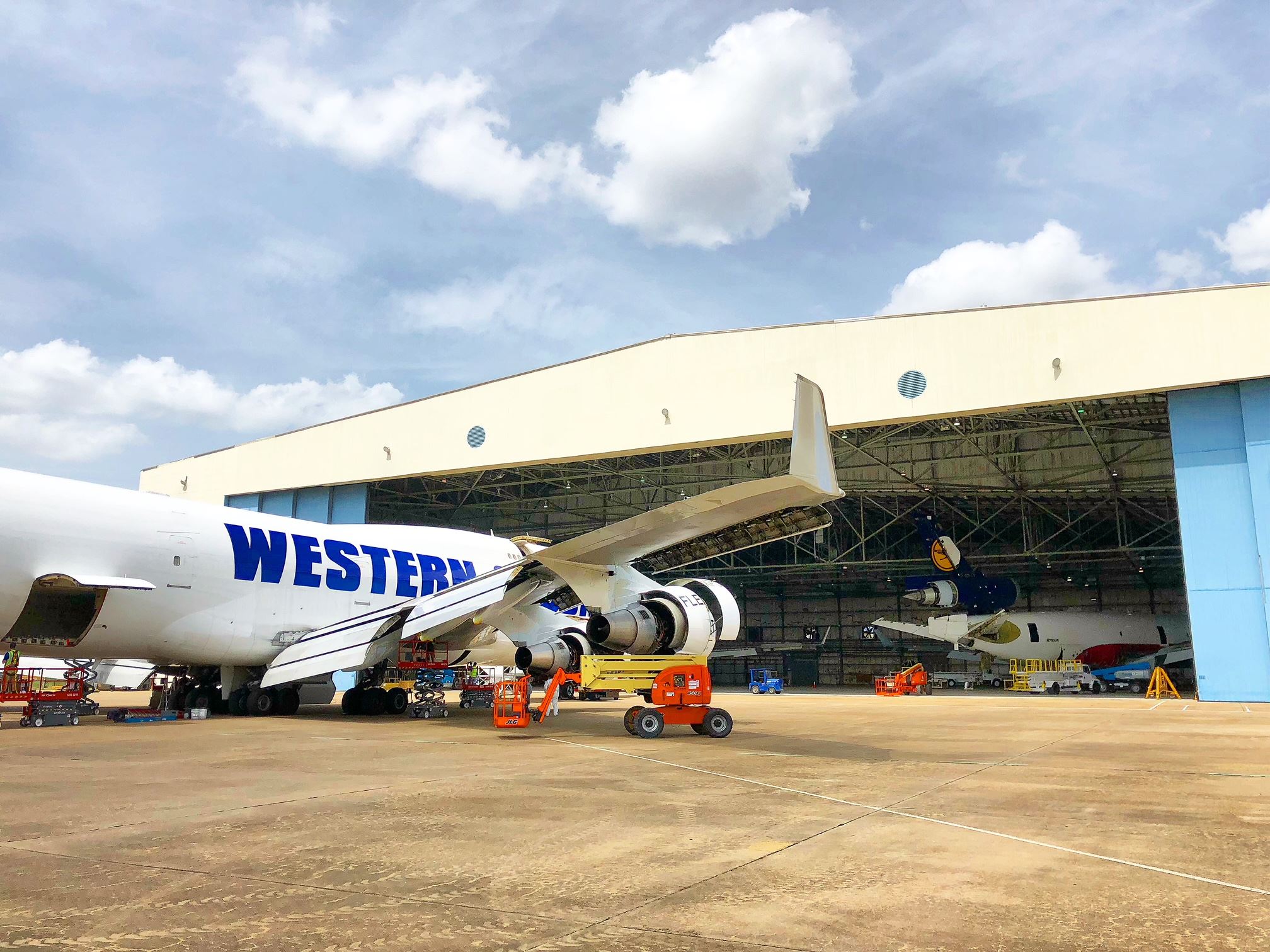